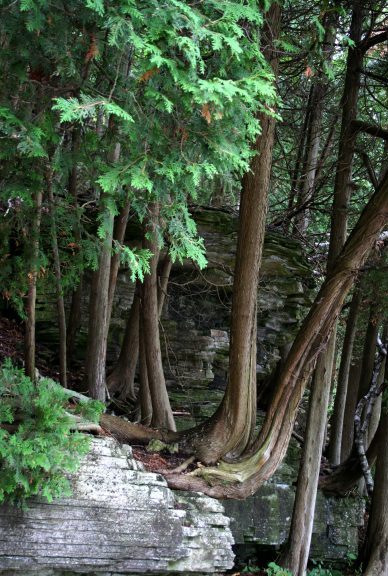 What is White Cedar?

White cedar is an evergreen or coniferous tree, and is a softwood, in contrast  to trees like maple and oak, which are deciduous and called hardwoods.

White cedar is very common in the northeastern U.S.A., southern Ontario, and northern Ontario up as high as James Bay. It grows mainly in rocky and wet areas, and has a wide fibrous root system which allows it to cling to rocky difficult areas where hardwoods cannot grow. It is a medium size tree, growing to a size of roughly 50 feet when mature.

It contains natural oils which protect against mould, temperature variations, moisture and insects. Its name “arborvitae” means “tree of life”- appropriate since its flattened leaves are eaten in the winter by wildlife such as deer, and its protective oils have made it useful for centuries in the production of items which must resist decay even when in contact with moisture, and outdoors in extreme temperatures – items such as logs for cabins, poles, posts, rails for fences, shingles for roofs, saunas, decks, docks, etc. It is no accident that many barns were made from cedar boards, and are still standing many decades later.

A Word About Knots

Since white cedar trees are comparatively short trees (50 feet), white cedar lumber does contain knots, produced when the branches form off the main trunk of the tree. These knots add character to the wood, and make it more interesting than plain (“clear”) lumber. Toleration for the number and type of knots is a very individual taste. Most people would prefer to avoid knots that can easily fall out, leaving holes behind.

This is the standard adopted by Scouten White Cedar – boards with unstable knots or holes are rejected – either discarded or sold as #2 lumber at a reduced price. Even if the knots are stable, the board is rejected if the number or size of the knots is deemed excessive.

To Coat or Not To Coat Your Cedar Products

Both white and red cedar can be left to age naturally, without coats of preservatives. Because of their natural oils, both will last for a number of years, despite extremes of moisture and temperature. It is certainly the easiest way to go. However, the wood will change colour, and it will not last as long as wood that has been coated with preservative.

The major problems are sun and water. Water will soak into unprotected wood, and the alternating expansion and contraction as the water freezes will damage the wood fibres, accelerating the decay process. This process happens more slowly with cedar than with other woods such as spruce or maple etc, but it still happens, and decreases the useful life of the wood. You can see the effect of the water and the sun’s ultraviolet rays by looking at an old barn and comparing the wood under the roof overhang (protected from the rain and sun) with the wood further down the sides and more exposed to water and sun.

If you choose to coat your white cedar, consider the following points:

We are proud to display the Ontario Wood logo. This shows that all our white cedar lumber is harvested in Ontario. By selecting Ontario-grown white cedar, you are supporting Ontario's economy and helping to provide jobs in Ontario for the people who work in forestry, one of Ontario's great natural resources.